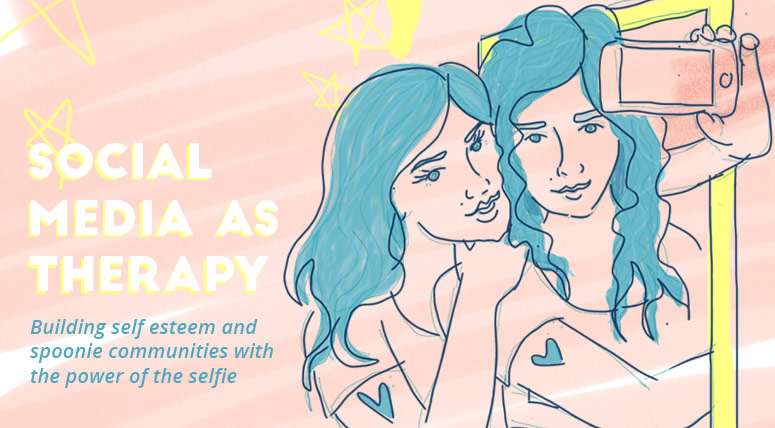 The “curse” of social media on society (particularly vulnerable millennials) has been a narrative that has been discussed endlessly over the past decade – but what if instead of letting it make us feel inadequate and alone, we used it as a tool for building a positive self-image and raising awareness of chronic/invisible illness?

Many people see social media as an exercise being vapid and fake. People post pics of their lunch at a fancy cafe, but not the 2 minute noodles they have for dinner later. They post dolled-up photos with friends from a night out but not from when they are lying around in bed with puffy eyes and smudged eyeliner the next day. The conventional wisdom is that these forces create an environment in which everyone thinks they have to be perfect 24/7.

And don’t get people started on the selfies. A quick Google search reveals countless op-eds on the subject of how selfies are the embodiment of everything that is wrong with an entire generation of narcissistic youths, with writers and commenters all convinced that the very idea of taking pictures of yourself began within the past decade, and that anyone who ever did so could only be motivated by an endless quest for validation via facebook likes.

Before you stop reading and decide that I’m yet another millennial blindly replacing a focus on “the things that really matter” with meaningless internet hearts, I’m here to say that’s simply not the case. In contrast, over the past couple of years I have become quite involved in the chronic/invisible illness/spoonie* community on instagram, and it has been a revelation for my personal self esteem.

Learning to love the person you see in the mirror

My relationship with instagram has been all about posting a very real version of my life living with narcolepsy. I try to make posts about everything: from the good days to the bad, and sometimes even those that aren’t particularly eventful at all.

On a good day, I’ll post a photo of my smiling face, something that made me happy that day or a quote that I found inspirational. These posts are self-validating; acknowledging when I have overcome a period of struggle. It’s the equivalent of giving myself a mental pat on the back, reminding myself that my achievements are worth celebrating. Importantly, it also builds my self-image as someone who is resilient in the face of daily frustrations.

On a bad day, my posts act as an excellent way to vent my not-so-positive emotions. There has been extensive research on the way that bottling up your problems by not talking about them has negative effects on our mental and physical health, which I completely agree with, but I have never been very comfortable in asking people to listen to my problems when I am feeling down.

On the other hand, posting a long rant on Instagram feels like shouting the problem into a void, releasing these troubling emotions and lightening the tension in my brain. The very act of writing down my feelings is an act of clarification, helping me to further understand my own thought processes and acknowledge my feelings of hurt, confusion and hopelessness instead of trying in vain to ignore them.

Telling our own story

A friend of mine (another person with narcolepsy who I first met through Instagram) once told me about a theory she had been read recently concerning storytelling. The basic idea was that humans understand everything in the context of narratives, which made a lot of sense to me. Two people can experience the same events, but depending on the way they explain it to themselves, have vastly different feelings about them.

My use of social media helps me to tell my own story – to others and to myself. It has literally changed the way I think about my own life for the better.

An empowering concept for a person with chronic or invisible illness

In the usual narrative of social media, the ability to curate a particular version of our own lives is seen to be a negative, but in this case it empowers those with chronic illnesses to be in control of our own narrative – a stark contrast to how we are frequently misunderstood and mislabeled by those who do not understand our conditions.

This also fits into a wider concept of selfies as a feminist statement. Far from being about young people (particularly women) reducing themselves to nothing but a heavily-edited image for the opposite sex to admire, the selfie allows us to express ourselves in the way we choose on our own terms.

You might think that would be everything positive I have to say. After all how can something so broadly dismissed as superficial, and even harmful, be of that much benefit? But I haven’t even started on one of the best aspects of social media for people with chronic illness – the community.

Living with a chronic and invisible medical condition like narcolepsy is incredibly isolating. It affects only 0.05% and most people are not particularly vocal about it, so the chances of me happening upon another narcoleptic by chance in my day-to-day life are slim to none. It is also widely misunderstood by the general public, and is so complicated that even close friends and family can never truly comprehend the experience despite their best efforts.

In contrast, social media makes it possible to connect with others sharing that experience just by searching for a hashtag. I’ve suddenly found a big group of friends who understand exactly what I am dealing with every day.

Seeing other people post about their everyday lives with chronic illness makes more of a difference than I ever would have imagined before being exposed to it. One of my main goals in coping with chronic illness is letting go of the idea that my life should conform to “normal” standards of success, and when I see these other incredibly brave, strong and beautiful people overcoming immense obstacles but still loving life it really compounds my commitment to believing in myself and my ability to do the same.

On the flip side, I regularly get messages from other people with narcolepsy and anxiety thanking me for sharing my personal stories; often expressing that they thought they were the only one going through life with these thoughts and emotions before they saw it written down in my words. For this reason I often seek out others with narcolepsy to comment on photos and start conversations with, and try to answer any questions I can.

While being exposed to a whole new group of people who just “get” you in a way others can’t, social media can be beneficial on a purely social level. When you have a chronic illness, it is not always easy to get out and about to catch up with friends or meet new people. The obstacles are both physical and mental, and can often lead to a lack of social contact which can be really damaging to our mental health.

Having other people to chat to about topics both light and serious is really important for all human beings to be healthy and happy, and while online contact may not be *as* good as the real thing, it is so much better than nothing! And let’s be honest, for most people like myself, social media isn’t going to replace face-to-face socialising, but it can supplement it in times where this is difficult.

My last point might be a little high-minded, but I think it is still important to mention. I find that my social media presence is not only validating for me on a personal level, but also makes me feel like I have a greater purpose above just succeeding for my own sake. It might sound silly to those who have no experience in this arena, but I feel like I am actually making a difference (however small) in other people’s lives just by posting my semi-regular selfies and rants about whatever anxieties are bothering me that day.

I don’t buy into the idea of being a “role model” for others, as I am far from perfect and still have a lot to learn myself, but knowing in the back of my mind that if I go for a run today I can post about it later just offers added motivation. I want to be the type of person who DID go for a run, and so I just do it!

Of course all this is just my individual experience, affected by my general attitude and interest in being self-aware about my mental health – you can read more about this in my Change Your Thinking posts. I’m not going to argue that social media is always a positive influence, nor that it can’t be addictive – particularly for people with narcolepsy (including myself!) who use it as a way to stimulate their brain enough to avoid falling asleep – I simply wish to point out that there are still plenty of benefits to social media when used in the right way, especially for people living with chronic illness.

This will always be best used as one of multiple different methods that any individual has for maintaining their mental health. Personally, I would also advise anyone with chronic illness to check in with a professional therapist/counselor/psychologist every now and then.

Ultimately, I believe that social media has developed an unfairly negative reputation when it can have such a positive influence, we just need to find ways to identify and maximise these positives! I also want to thank all my friends across different social media platforms for being such a great support and creating this positive experience.

*People in these communities often refer to themselves as “spoonies” – referencing the spoon theory, a commonly used metaphor about living with chronic illness or disability